Coming up: ConfigMgr updates and servicing, a new way of updating 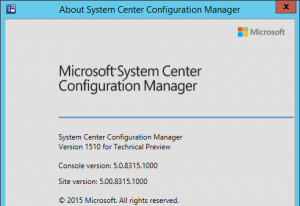 Why do we need it?

We all know that Windows 10 will be updated in a faster pace, so most likely more and more features that will be added along the way. How Configuration Manager now has been setup/designed new features are added via Service Packs or sneaked in via Cumulative Updates. To be able to cope with the faster pace the Configuration Manager Product Team switched also to a quicker shipping model.

As communicated earlier the new System Center Configuration Manager is a product with an official “public” version number. No when a major update is released, like the technical previews it will receive a version number like the following 1510. The 15 will be the year and 10 will be the month, so 1510 will be the release of October 2015. Technical Previews will there be regular, most likely monthly. Official releases will be less often, and will be supported for one year after the release.

At MMS we had the joke that in 2020 we will have some nice versions again, if you know them leave them as a reaction 😉

So how does it work?

To be able to cope with the faster shipping of new released the Updates and Servicing node has been added. Via this node, which can be found in the Administration workspace under Cloud Services you are able to apply updates to the infrastructure in an easier way. There is no longer a need to wait for those “expensive” service packs, cumulative updates, or Extensions for Microsoft Intune, the updates are automatically downloaded by the Cloud Service Connection Point. After an update is automatically downloaded the Configuration Manager Admin is able to install the update or choose to install one or more features of the update. To be able to get the updates you need to configure the Microsoft Intune connector.

Via the Console the admin is able to monitor the installation of the updates throughout the infrastructure.

Let’s have a look

When we have a look at the Technical Preview 3 of Configuration Manager we see that the Updates and Servicing node is available and that an update 1510 has been added.

Selecting the 1510 update allows you to Run prerequisite check or install the Update Pack by selecting Install Update Pack. Via the wizard you can configure the update process and how the clients are updated, but more on this feature in a next blog.

While updating the Configuration Manager infra you are able to monitor the upgrade/update process in the console itself.

And check if the update has been installed or not.

In the following blogs I will try to highlight other nice new features of the new System Center Configuration Manager. If you are in Munich this Thursday, be sure to attend the System Center User Group meeting. I will be presenting a session about this new version.

TechEd North America is going strong and more and more information is shared with the attendees and community.…

Today the Cumulative Update 5 for System Center 2012 SP1 Configuration Manager has been released. So if you…