Since I am not a software developer most of the information shared during the SDK Community Evaluation Program of Configuration Manager 2012 session was a bit to technical for me. But nevertheless an interesting session, and maybe sometime in the future I will try the SDK  to test some PowerShell integration 🙂 Let’s see what the SDK will bring the future Configuration Manager 2012 software developers!

What is the plan for the Configuration Manager 2012 SDK?

The beta of the Configuration Manager 2012 SDK was released during MMS 2011 for inventation only. The beta is now available on the connect site of Microsoft. The roadmap for the SDK is the following: 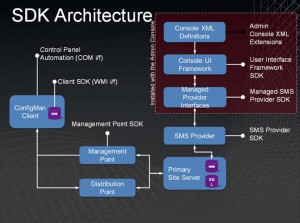 The SDK will extend on the following areas in Configuration Manager 2012:

If you want to have more in-depth information about the extension areas you can download the slide deck and recording of the CEP session at the connect site this week. You need to become a Community Evaluation Program member to be able to access the content.

The Configuration Manager 2012 SDK has also support for PowerShell

Next CEP session is August 24th and the session will be about Software Updates Management in Configuration Manager 2012.

Like mentioned in my earlier blog about the Citrix XenApp connector for Configuration Manager 2012, after the installation…