Today the 10th theme of the Configuration Manager 2012 CEP was presented by Eric Orman, part of the Configuration Manager product team. This livecast session was about migrating ConfigMgr 2007 to ConfigMgr 2012. In the past the easiest way of migrating SMS 2003 to SCCM 2007 was a side by side migration. With SCCM 2012 things are going to change for the best, the very best 🙂 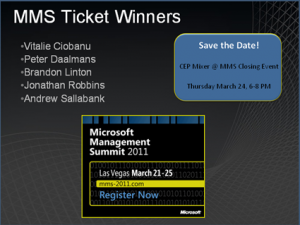 Like I mentioned in earlier blogs while I was at TechEd in Berlin, the CM team is going to make the migration of SCCM 2007 to SCCM 2012 much easier.

With the new Migration Feature in SCCM 2012 the CM Team wants to reach the following goals:

The migration process of SCCM 2007 to SCCM 2012 can be split up in three phases: Plan, Deploy and Migrate.

Enabling the migration is done by connecting to the top most SCCM 2007 site. This is done by specifying a migration source; this is always the top most Primary Site Server in the source hierarchy. After creating the migration source, the gathering process will start. This is no processor or network intensive process and after the initial gathering only delta data is processed. SCCM 2012 checks the SCCM 2007 sites every 4 hours to keep the data accurate.

Step two in enabling the migration is to configure the credentials per site top down.

Migration jobs can be created

At this moment the migration of the Forefront Endpoint Protection integration is not yet covered in the Beta 2 version, but it will be in the final version.

Migrating  jobs can be created for:

Mixed collections are not supported.

When migrating a global collection (like All Windows 7 machines), you can limit the scope because normally when a collection is migrated it will be available globally.

When a migration job fails, it is not necessary true that the whole job is failed. A part the job can be completed.

The jobs can be scheduled or runned instantly.

Software and Hardware Inventory is not migrated.

Ensure that the Software Update Point is configured and the Update Repository contains the same updates as in the SCCM 2007 environment. You can use wsutil.exe export/import

Supported by the migration:

Existing SCCM 2007 config packs can also be added to SCCM 2012 through the import feature.

Additional objects that can be migrated:

Migration rules and prepare your environment:

Theme 10 was a session with loads of information, during MMS I will attend a lot of SCCM 2012 session so read all about it over here! J Can’t wait until it’s the end of March, because SCCM 2012 Beta2 will go public!